Eating Your Way Through the Fringe Festival

By Peter Benson
1.24k
Every August, Scotland’s capital hosts Festival Fringe, the world’s largest arts festival. Acts range from comedy to theater at more than 300 venues scattered around the city (for recommendations, see “Three Not-to-Miss Fringe Shows” at right). In its 71st year, the Fringe (as locals call it) features 3,548 shows, the most in its history. During the festival, the city’s population doubles from its usual 482,000, so space on Edinburgh’s pedestrian-heavy streets like the famously one-sided Princes Street and the Royal Mile, which serves as the Old Town’s high street, is at a premium. From the 3rd to the 27th, every nook and cranny of the city boasts tourists, buskers, and street performers from all over the world. Pubs, bars, and clubs receive extended licenses, continuing many of the celebrations until as late as 5 a.m. But all that artistic chaos and humanity presents a challenge for those in search of a good meal. Even though Scotland’s most famous food item, haggis, features sheep’s organs, onions, oatmeal, and spices traditionally encased in the animal’s stomach, the historic city is vegan-friendly thanks in part to its young population of students, artists, and travelers.

Here are four of the best places, chosen by locals, to grab some brunch, lunch, dinner, or drinks while taking in Edinburgh during its most eclectic, vibrant month of the year. 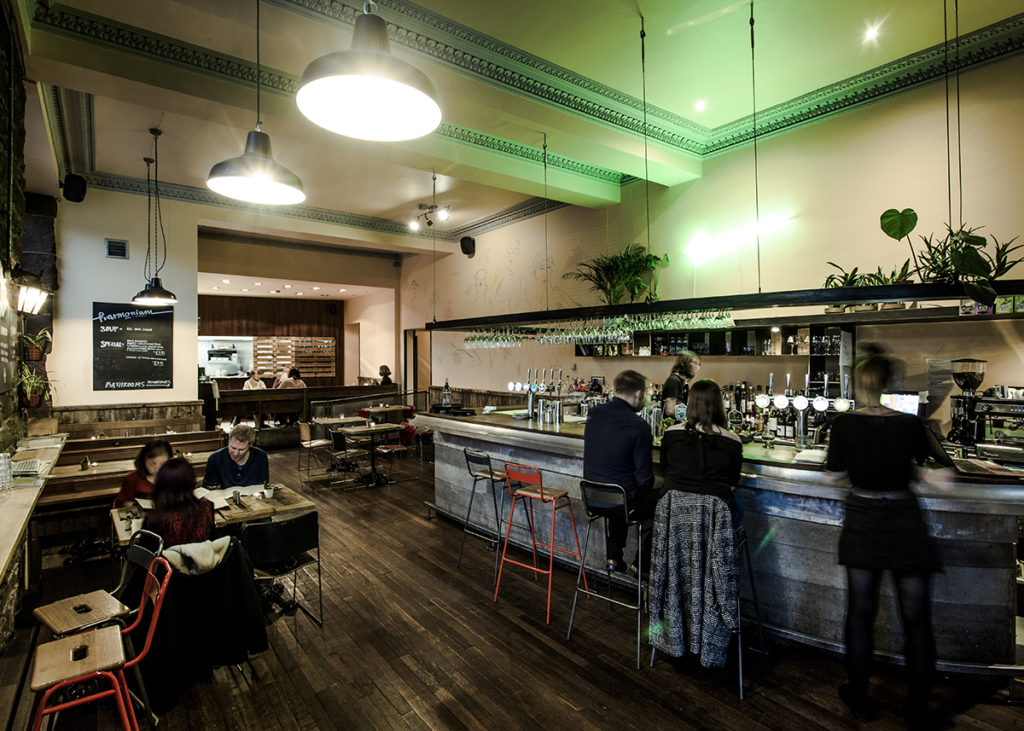 Harmonium’s interior pays homage to Leith history with its warm and welcoming atmosphere. The restaurant welcomes all ages and is even dog-friendly. Photo courtesy of Harmonium.

Located about a two-mile walk from the city center in Leith, one of Edinburgh’s most diverse neighborhoods, Harmonium takes inspiration from its surroundings — namely the North Sea and the Water of Leith — by offering plant-based cooking that features seafood textures and flavors. Try the heart of palm calamari ($6) with salty soy glaze and sautéed mixed peppers or Thai style “crab” cakes ($12.50) complemented by crunchy roasted peanuts with hot chilli and Sriracha mayo. Harmonium also features an extensive selection of cocktails. An espresso martini ($8.50) provides the perfect perk before a late show, or try a glass from their list of fully organic wines. 60 Henderson St., Edinburgh, EH6 6DE.

Insider Tip: Before dinner, take in the Royal Britannia, the Queen’s former maritime residence. The 65-year old vessel has been docked in Edinburgh for 20 years on the banks of the Firth of Forth.

Just off the Royal Mile, home to multiple venues and street performers during festival time, David Bann’s restaurant earns praise for its artistic food presentation and a menu that extends beyond national borders. Bann’s restaurant caters most of its menu to vegans either as standard or on request. The owner prefers his food spicy and, if you do too, the spicy chili with guacamole and chocolate ($17.50) marries heat and sweet while pleasantly balancing the soft texture of butter beans and sweetcorn. The stir-fried veggies include dense udon wheat noodles and house-smoked tofu ($16). Bann’s dessert offerings feature a range of homemade sorbets and vegan ice cream ($6.50) as well as a coconut and oat milk pudding ($8) that delivers a sweet taste of a Scottish favorite. Given its location, Bann’s restaurant serves as a great choice for before or after some evening comedy, the Fringe’s most popular genre of show. But Bann recommends arriving early as the restaurant doesn’t take bookings during the festival. 56-58 Mary St., Edinburgh, EH1 1SX

Insider Tip: Stroll up the Royal Mile after dinner and take in street performances before heading underground to explore 17th-century Edinburgh, still standing under the ‘new’ city. 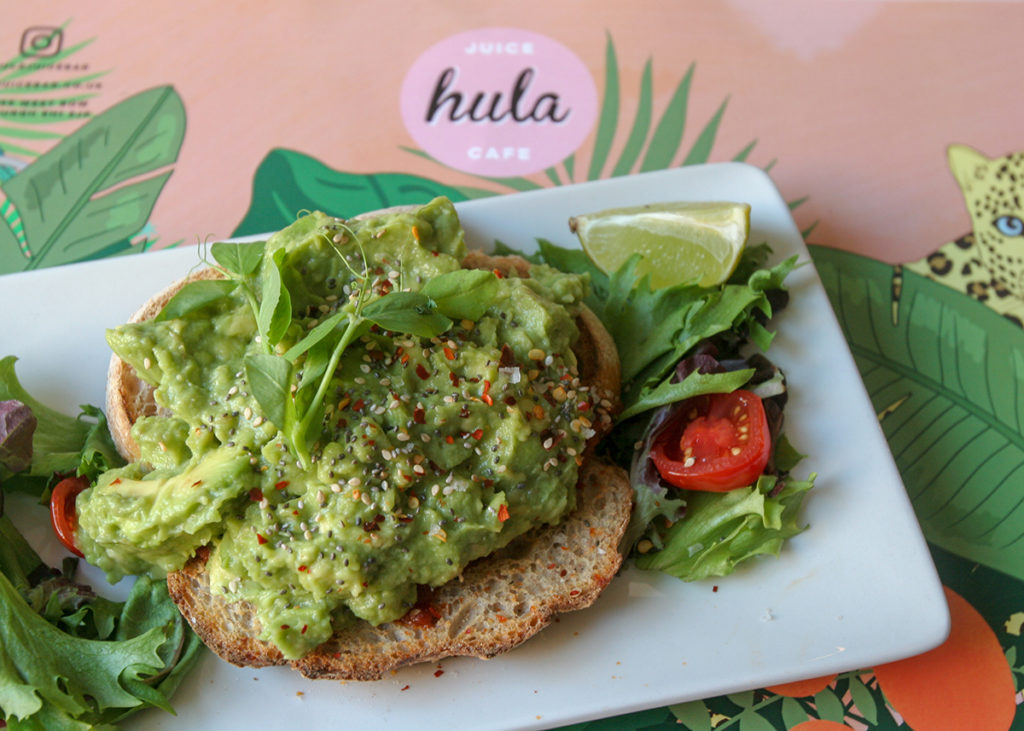 Smashed Avo on Sourdough bread is one of many breakfast options at Hula. Topped with the “special hula mix” of chia and sesame seeds, as well as chilli flakes and a citrusy wedge of lime, this morning favorite will kickstart your busy festival days. Photo courtesy of Hula Juice Bar.

The electric pink and azure shops and bars of Victoria Street that surround this personality-packed breakfast and juice joint deliver as much color and vibrancy as the drinks themselves. On the doorstep of the Grassmarket, named after one of the two markets the street hosted in the 1720s, Hula offers festival-goers an easy, quick opportunity to recharge with a cup of locally roasted coffee (from $3.50), colorful poké or salad bowls ($10), avocado toast ($9), or some hearty Scottish oats (from $6) topped with fruit and honey. “We want to make vegan fresh and tasty,” says cafe director Stefanie Borgen-Nielsen. They also offer plenty of superfood juice options and signature boosters that provide antioxidant replenishment, immune boosting, or hangover cures when necessary. 103-105 West Bow, Edinburgh, EH1 2JP.

Insider Tip: A saunter up Candlemaker Row after grabbing your juice leads you to The Elephant Room, the cafe where JK Rowling began writing the Harry Potter series. In the other direction sits the University of Edinburgh’s campus, one of the oldest in the United Kingdom and home to a number of Fringe venues.

On quiet Thistle Street, between shopping haven George Street and the beginning of the New Town’s Queen Street, sits El Cartel, a petite Mexican restaurant with a staff willing to create vegan versions upon request. The Masa Harina corn tortillas that open the menu feature a range of dazzling ingredients — there’s a charred beetroot, beet mole, and peanuts option or one with French beans, spinach, and crispy mint (both $8.50). If you fancy a drink, El Cartel offers more than 80 different tequilas as well as a variety of cocktails, including their take on the margarita (all dusted with smoky paprika salt for added spice). 64 Thistle St., Edinburgh, EH2 1EN

Insider Tip: Visit nearby Queen Street Gardens. As beautiful and almost as large as the famous Princes Street Gardens, this green oasis is great for a little recuperating before a show.

Three Fringe Shows Not to Miss

Edinburgh’s Festival Fringe program packs more than 3,500 shows into one month. For starters, consider these three.

Chemo Barbie. L.A.-born vegan Heather Keller always wanted to perform at the Edinburgh festival after visiting the city as a teenager 15 years ago. Keller, who trained with the Upright Citizens Brigade, created her one-woman show after her breast cancer diagnosis two years ago. Keller tells her story through 25 characters, some real, like her grandmother (also a breast-cancer survivor), and some as amalgamations of people in her life.

See Keller’s show at the Gilded Balloon venue in Teviot Square at 1:30 p.m. any day between August 1-27 (with the exception of Monday, August 13th).

Girl on Girl: The Fight for Feminism. Former Senior Advisor for Britain's Labour Party Ayesha Hazarika dabbled in stand-up comedy before becoming a politician, and eventually returned to the comedy scene. Her new hour-long show explores the #MeToo landscape and is as insightful as it is hilarious.

Hazarika plays at the Gilded Balloon venue in Teviot Square at 6:45 p.m. in their wine bar between August 2-11.

Underground Railroad Game. One of The New York Times’ “25 Best American Plays Since Angels in America,” Underground Railroad Game takes place in a fifth-grade classroom and explores a painful, divisive time in American history. Both writers star as two teachers, one Black and one white, who oversee the classroom’s division into the Union and Confederacy as the different sides receive points for actions such as smuggling slaves.

Showing at the Traverse Theatre, Underground Railroad Game is playing all month from August 2-26 during various times of the day.