By Shweta Karikehalli
1.69k
When medical intern Erin Reidy first walked into Tiger Kingdom, a tiger park in Chiang Mai, Thailand, in 2014, she knew something was wrong. The tigers seemed listless. Visitors played with their tails and even reclined on them, she says. The 24-year-old educator says she and others in her cohort asked staff members if the tigers were drugged. But each time, they received the same response: the animals were just “really well-trained.”

The group left the sanctuary stunned. “Everyone was really in shock,” she says. “We were all kind of looking at each other like this is messed up; this is not O.K.”

Many likely share Reidy’s experience. Thailand attracts many animal tourists, and tigers and Asian elephants rank high on travelers’ lists of must-see species. According to a 2016 study by the nonprofit World Animal Protection, 40 percent of tourists from the top countries visiting Thailand said they had been or were planning to ride an elephant. Another study by WAP in 2016 shows that the number of captive tigers in Thailand’s tiger entertainment industry jumped 33 percent from 2010 to 2015-2016 due to demand.

Tiger and Asian elephants are both endangered in the wild, and their captive counterparts often suffer at unethical sanctuaries. Experiencing the wildlife of another country provides an exciting window through which to view that country, but identifying and separating the sanctuaries that do good work from the tourist traps can be difficult. Martha Honey is the co-founder and executive director of the Center for Responsible Travel (CREST), an organization that promotes responsible tourism practices while abroad. 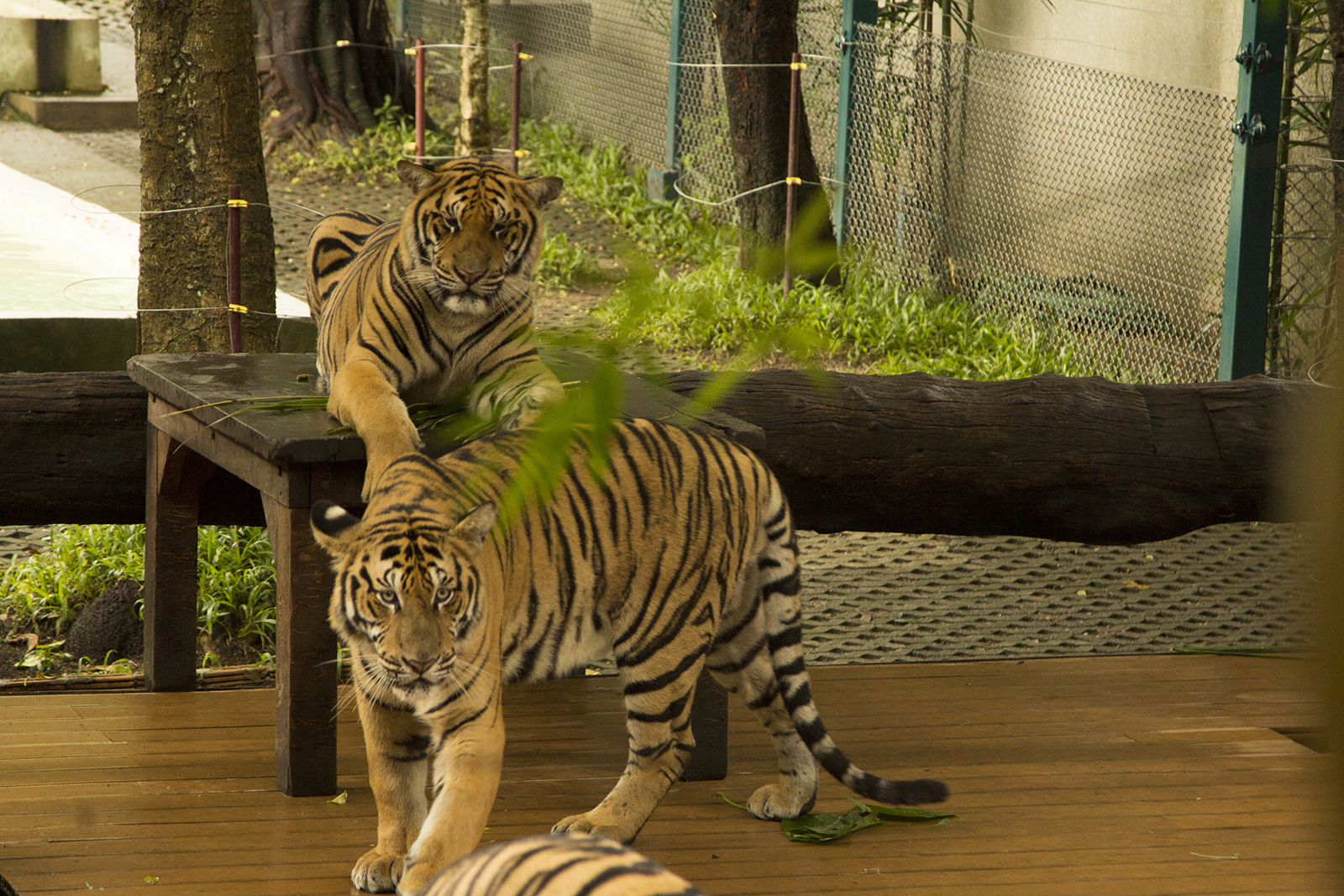 Tigers do well when they can chase and climb; it helps simulate some of the activities they do in their natural environment. It also ensures they don’t get bored and therefore drowsy and docile. Photo by Luca Nebuloni.

“I think what we need to be looking at is the concept of animal welfare and how can tourism help to protect animals — not just animals that are in captivity but also that are in the wild that tourists may be going to view,” says Honey.

Let these six expert tips help you find sanctuaries that offer the most ethical and fun wildlife experience in Thailand.

When you research sanctuaries, start by looking at their websites and comparing their online reviews. This provides a first look at the conditions in which the animals are kept. If the photos from reviewers differ from those on the website, consider it a warning sign. As a reference point, use the guidelines set by Born Free, an organization that exposes exploitation of captive wildlife, suggests Honey. Born Free maintains that any animal kept by man must have access to fresh water and a proper diet to maintain health and vigor, be provided an appropriate environment, including shelter and a place to rest, have access to treatment for pain and disease, be free to express normal behavior, and be ensured “conditions and treatment which avoid mental suffering.” The Global Federation of Animal Sanctuaries lists guidelines for several species of animals, but these aren’t always followed. Bill Shields, a professor emeritus at the SUNY College of Environmental Science and Forestry who teaches a course on animal behavior, says sanctuaries should mimic an animal’s natural habitat as much as possible—especially if they’re being released into the wild. For tigers and elephants, that means providing ample space to roam, Shields says. African elephants have home ranges of up to 4,217 square miles, and the home range of an Asian elephant is about 300 square miles, according to the Global Sanctuary for Elephants. Elephants are highly social creatures and need to live among a herd. So if an elephant is by itself, that’s also a red flag. Tigers also require a lot of room—about 39 square miles—to roam. 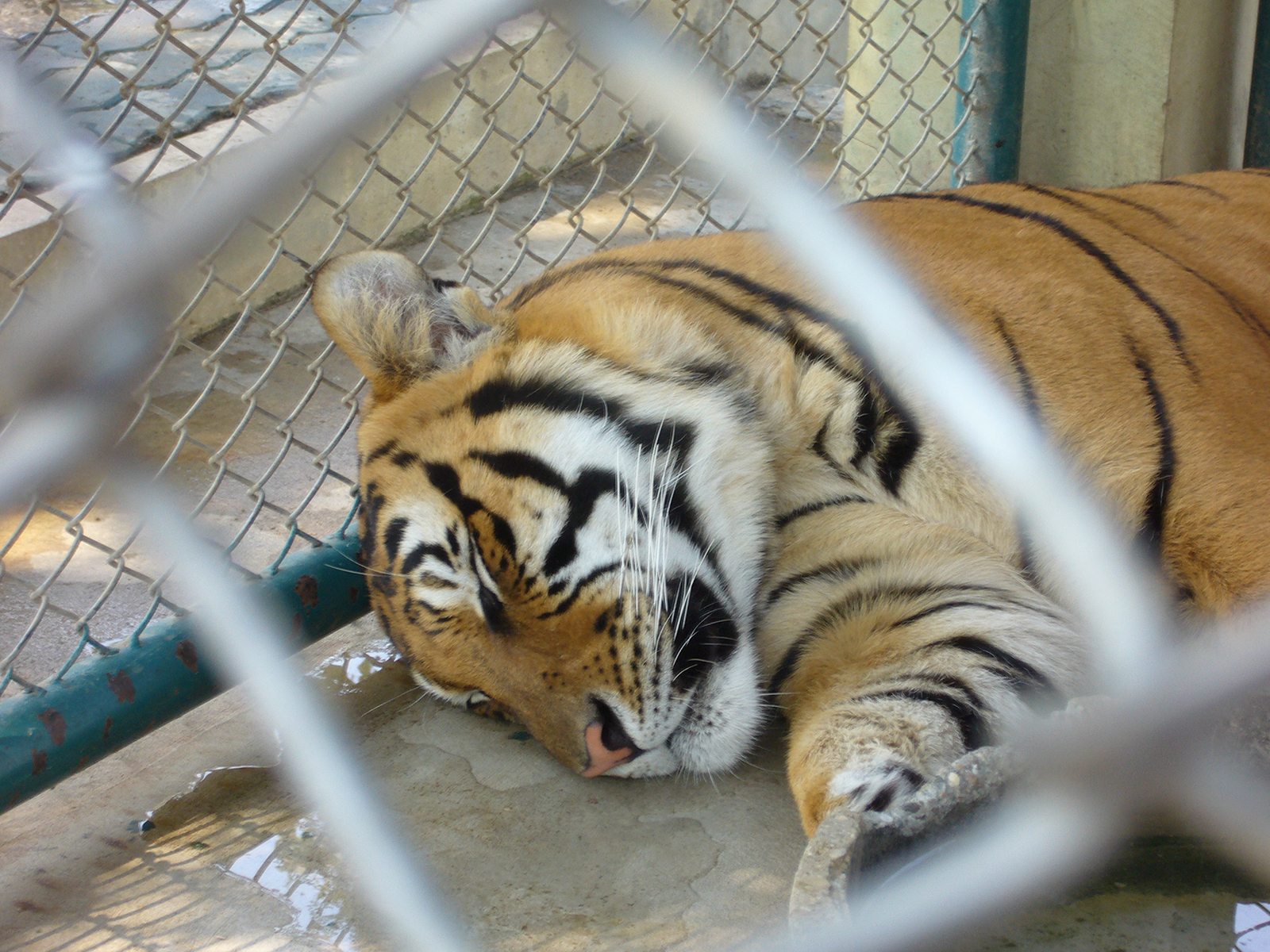 A tiger that seems lethargic isn’t necessarily drugged — drowsiness can sometimes indicate a lack of things to do. Tourists can often get so close to the animals because the animals have grown used to close contact with humans. At an ethical sanctuary, the tigers won’t be so receptive to humans in their personal space. Photo by Caitriana Nicholson.

Elyse Iemola volunteered with Pinnawala Elephant Orphanage in 2014, caring for elephants that couldn’t be released into the wild for various reasons including injury, behavioral issues, and domestication. The environmental educator says it’s important to understand that animals that won’t be released are cared for differently than those being conditioned for eventual release. The former likely have much more direct human contact, and they may be chained at certain times as a safety precaution, she says. When considering the interplay of humans and animals, Robert Hilsenroth, executive director of the American Association of Zoo Veterinarians, says the fears Reidy held regarding those lazy tigers and their tails probably didn’t involve sedation. If they were, it would be a “death sentence” for the animals because their livers couldn’t handle the toxicity of the drugs. The more likely scenario, he says, is that the animal has been habituated to be around humans since birth, and the drowsiness reflects boredom — not sedation. However, that doesn’t make the treatment ethical. It also negates the facility’s identity as a sanctuary because the animals are being farmed to be complaisant and friendly. Hilsenroth also cautions that any animal’s behavior is unpredictable. Even if a tiger seems as domesticated as a house cat, visitors who get up close and personal with them run the risk of being attacked at any time, Hilsenroth says.

Look for Signs of Stress, Boredom

Beyond space, water, and food, animals also require entertainment. Tigers need toys they can chase and pounce to simulate hunting, and natural prey to hunt if possible, Shields says. Retired working elephants also do much better when they’re given logs they can lift, which helps them expend some of their energy. If the animals lack these enrichment opportunities, they tend to do what is called stereotypical behavior and characterized by an animal walking around in a path obsessively, which signals stress, boredom, or both. Shield says if an elephant rocks back and forth on all four legs and swings its trunk as it rocks its head, that serves as a clear sign the that animal is stressed. It’s generally good practice to question everything you see. However, in some cases there’s more than meets the eye. During her time at Pinnawala, Iemola says she directly communicated with several organizations before she finally found one that she felt was ethical and that she wanted to be a part of. She spent a month in Sri Lanka caring for elephants that couldn’t be released back into the wild for various reasons. One thing that visitors constantly questioned her about was why the elephants wore unchained ankle bracelets. “The whole point is just that it’s a safety precaution, so in the event that something happens, or something spooks it (the elephant), they’ll move slightly slower,” Iemola says. “The biggest issue of their day is that they have a slightly heavy bracelet on.” So if a sanctuary has photos of chained elephants, it’s not always a bad thing. lemola recommends reaching out to the centers directly and hearing what they have to say. 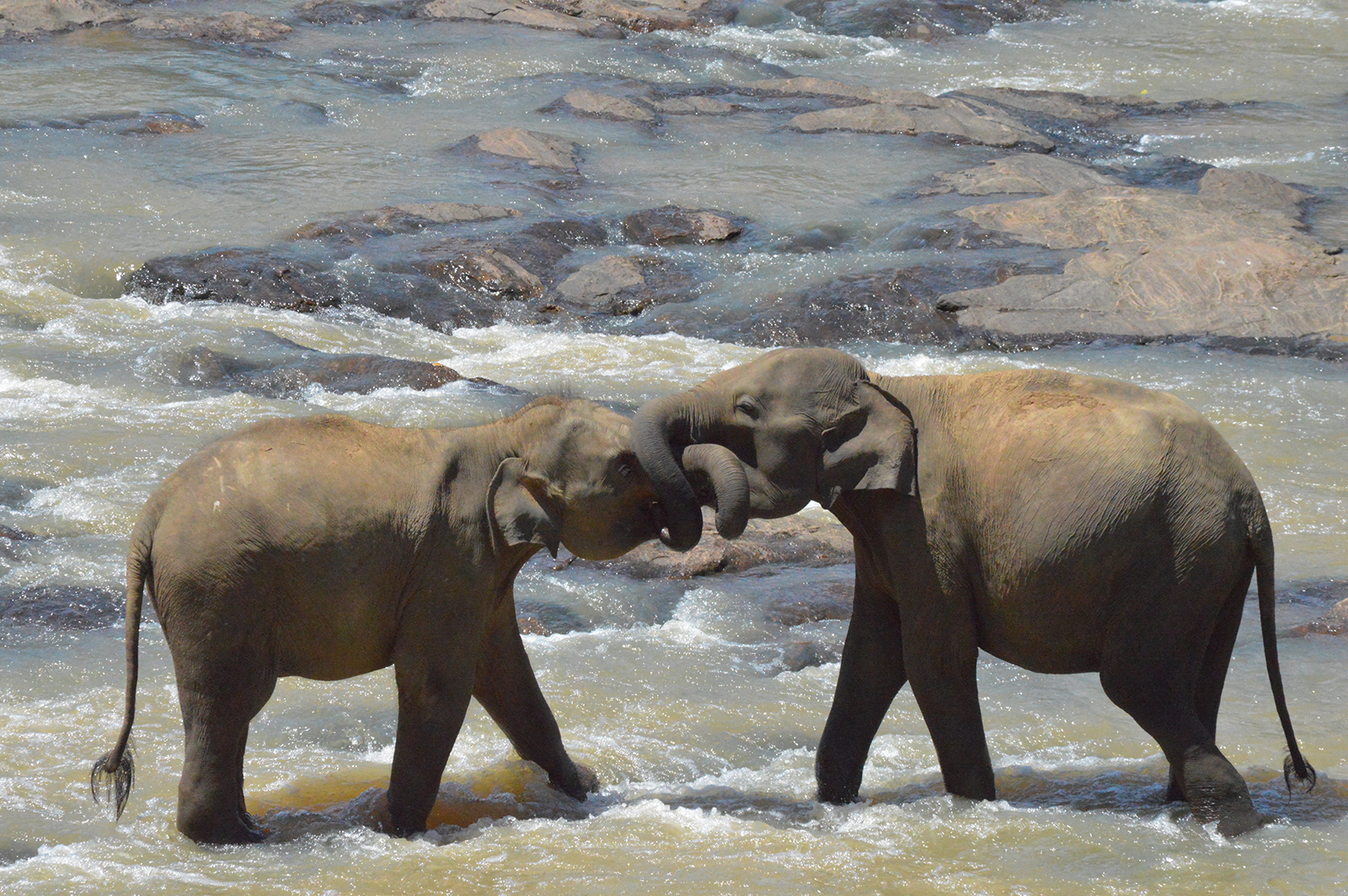 Inherently social creatures, elephants must live in a herd to ensure good mental health, according to Bill Shields, professor emeritus at the SUNY College of Environmental Science and Forestry. Happy elephants in sanctuaries may be seen displaying a behavior like this to greet one another. In contrast, unhappy elephants often swing their trunks back and forth, rocking on all four legs. Photo by Stephen Clarkson.

Several wildlife sanctuaries operate under the premise of helping to conserve wild populations, similar to zoos. Tigers and elephants are endangered species, so there may be reasons to keep them in sanctuaries. However, Shields says, it can be a red flag when animals that aren’t threatened in the wild — such as several species of monkeys — live in a sanctuary. If a sanctuary says they are rehabilitating animals for release into the wild, and they allow a lot of direct human contact such as holding, riding, and feeding, then this may signal an unethical operation. The World Wildlife Fund provides a list of all endangered species worldwide. Use this helpful guide to know what animals merit protective status.

If you want to go one step further in supporting the environment, consider going on an Earthwatch Institute expedition in Thailand. Earthwatch supports conservation research by allowing citizens to work alongside scientists. The organization gives volunteers opportunities to work as research assistants on different projects around the world, which sometimes involve hands-on work with wildlife. Alix Morris, the director of communications at Earthwatch, remembers holding wild penguin chicks that were being weighed as part of a research project in South Africa. “It is that sense of meaning and giving back and supporting environmental research, in addition to going to these really amazing places and interacting with wildlife that you just can’t interact with in the same way without a research permit,” says Morris. Sometimes those volunteers even play a critical role in a discovery or contribute to projects that yield valuable new information. For example, in the Argentinian Andes, a volunteer unearthed evidence of a new species of carnivorous dinosaur, which was named after the eagle-eyed aid. Another expedition led to the discovery of a new species of shark, caterpillar, and spider. No prior research experience is necessary, Morris says, and all direct contact with wildlife is monitored closely by the scientists to ensure the safety of both the volunteers and the animals. Anyone interested in environmental conservation can get involved, and Earthwatch will work with you to find an expedition that best fits your specific needs.

Reidy returned to Thailand two years later and experienced a much more positive wildlife encounter. This time, she visited Elephant Nature Park in northern Thailand. The sanctuary takes in retired working elephants and gives them a place to roam. Visitors can observe the elephants and read their stories, but contact is limited to feeding them and watching them bathe in the river. Elephant Nature Park used to allow visitors to bathe the elephants but recently discontinued that practice because it felt that was too much human contact, per their Facebook page. “A lot of them have been abused and not fed, and they come from really awful places,” Reidy says. “Now they’re living in this really open area with rivers and streams and natural habitat where they can enjoy their lives, form herds, and be normal elephants.” 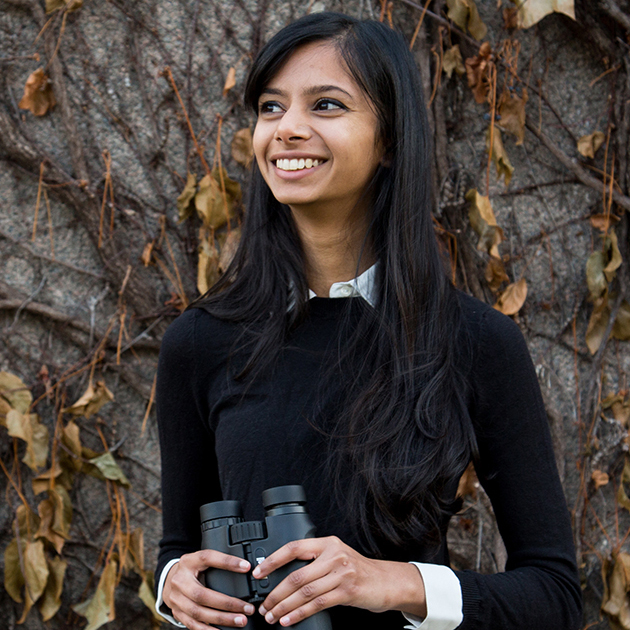 Shweta Karikehalli currently lives in Syracuse, N.Y., and has a background in environmental science. She hopes to use her education and skills to establish a career in environmental journalism. Karikehalli is interested in compassionate travel, and her dream is to work for National Geographic.