A Vegan Paradise in the Big Easy

By Peter Benson
1.45k
New Orleans has a habit of being on people’s lips — and for good reason. Known for iconic dishes like po’ boys, jambalaya, étouffée, muffulettas, and beignets, the Big Easy regularly earns inclusion on lists of the country’s top food cities, and its historical mix of cultures serves as the key ingredient in the city’s culinary appeal.

Take, for example, the state’s official cuisine, gumbo, which reflects French, German, Italian, and African cooking traditions. The name comes from a Bantu language for okra (ki ngombo) and from the Choctaw word for filé (kombo). Ian McNulty, a food writer for the New Orleans-based newspaper The Advocate, describes the food culture of his hometown as one that is “wrapped up in people’s identities.” That history and the devotion to its iconic dishes doesn’t leave a lot of room for newcomers with new ideas.

However, an infamous weather event opened culinary doors and helped to change the 300-year-old culinary landscape, including the arrival of one popular vegan pop-up. “For a long time, New Orleans was very unfriendly to a vegan lifestyle,” McNulty says. The port city possesses a strong relationship with seafood. The Gulf of Mexico offers an abundance of shrimp, octopus, and squid while the southern part of the Mississippi River and ponds in the surrounding marshland house the local specialty: crawfish. 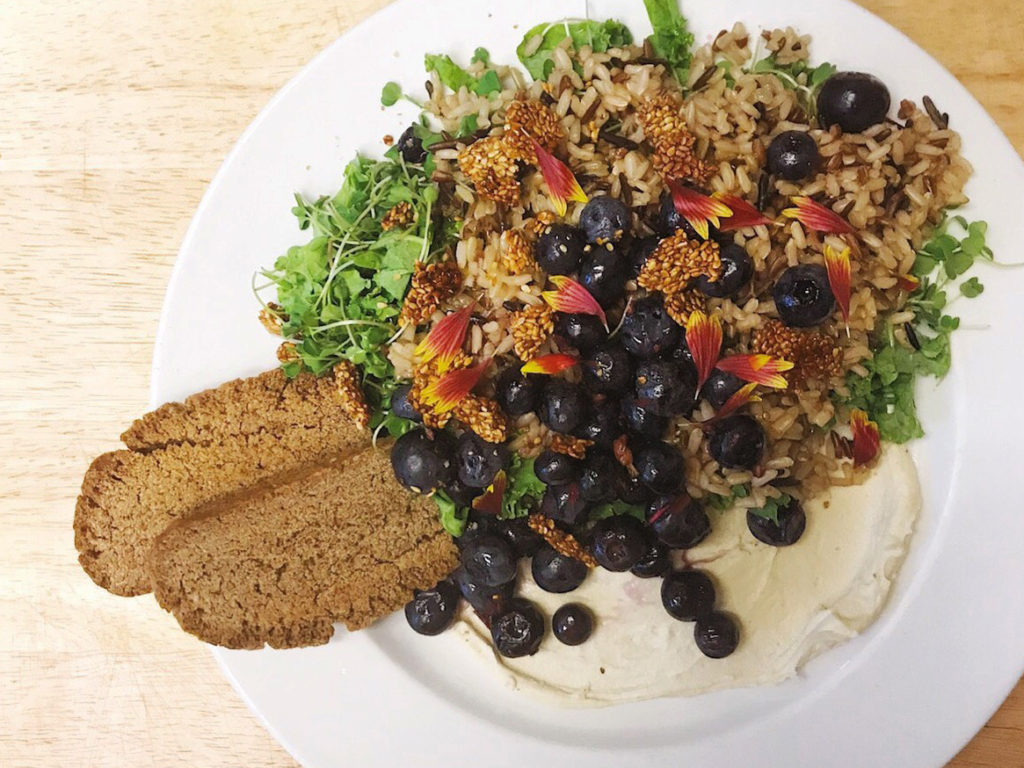 Bittersweet tarragon vinaigrette plays off the salty arugula microgreens and wild rice with pickled blueberries in this colorful dish. A creamy cashew chèvre is perfect to dip the crunchy house-made teff, rice, and sorghum bread. Photo courtesy of South of Eden.

Homemade almond and date milk makes South of Eden’s iced matcha creamy and delicious. The detoxing drink, packed full of antioxidants, will help energize you to explore the Big Easy. Photo courtesy of South of Eden.

When Hurricane Katrina dispersed evacuated residents to different areas of the country, the food choices they confronted bored them, says Liz Williams, director of the Southern Food and Beverage Museum in New Orleans. And when they returned to their city, they “clung to their food culture like a lifeboat,” she adds.

However, when those dislocated by the hurricane returned, their city had changed, offering new opportunities to a younger, more demanding crowd that followed the possibilities created by the city’s rebirth. “It brought a lot more trendy and forward ways of thinking,” Williams says. McNulty describes the new, post-Katrina city as more open to veganism, noting that pop-ups helped expand what foods were welcome because they were easier to approach and fostered a “let’s give it a try” attitude.

Liliana Ruiz-Healy, owner and operator of plant-based pop-up South of Eden, is one of those trailblazing innovators whose food residents tried and loved. Growing up in Mexico City, Ruiz-Healy remembers always being in the kitchen, relishing the effort that went into making huevos a la Mexicana, quesadillas, soups, and pasta. She loved seeing everyone light up when she sat around the table with her family. “I would bake so much and send it with my mom to her office so she could give it to people,” Ruiz recalls.

“When those dislocated by the hurricane returned, their city had changed, offering new opportunities to a younger, more demanding crowd that followed the possibilities created by the city’s rebirth.”

That baking started out as simple chocolate cakes and frosting, but she now makes a raw version with almond, coconut, and oat flour as well as dates ($90 for the whole cake) — a highlight of South of Eden’s catering menu that can be ordered via email. At a weekly brunch operated out of Good Karma Cafe, situated inside Swan River Yoga on Canal Street, one can expect to find a combination of morning favorites, including avocado with toast made from teff, sorghum and rice ($8.50) or garbanzo and chia-based pancakes topped with coconut whipped cream ($12.50). But many prefer creations that draw upon her Mexican heritage and deliver a little heat, such as the spicy serrano oil and cilantro-topped heart of palm ceviche tacos ($11) and lime-dressed chilaquiles with your choice of salsa verde or roja ($12).

Ruiz-Healy credits her struggles with an eating disorder and her search to be healthier with her transition to veganism. She began selling homemade vegan sandwiches to her colleagues while working as a kindergarten teacher at home in Mexico City. Shortly after moving to New Orleans in 2015, Ruiz-Healy started the pop-up shop once a month out of Solo Espresso, a small coffee shop in the Ninth Ward of the city. “People really had a lot of trouble understanding what I was doing,” she says of her first efforts. 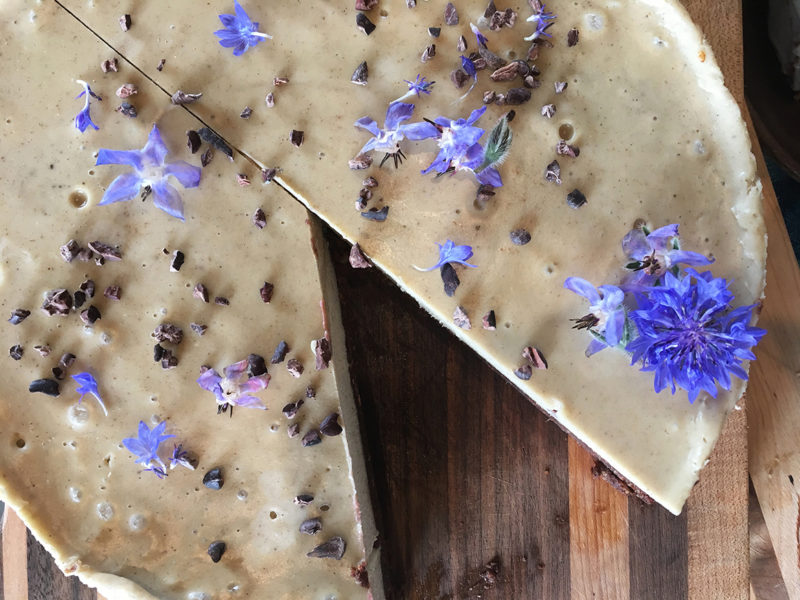 Edible flowers garnish this 100 percent raw cacao and lavender vegan cheesecake. Cacao nibs and walnut give the crust a crunch that will indulge your sweet tooth. Photo courtesy of South of Eden.

But residents soon began to seek out Ruiz-Healy’s food, and she expanded her venues to feed her growing fan base. Along with weekly brunch, South of Eden now appears at festivals and other cafes around New Orleans. Customers find her by following @VeganNewOrleans, a social account devoted to the Big Easy’s vegan scene that regularly features South of Eden, or by searching #SouthOfEden on Twitter. She can also be followed on Facebook, where South Of Eden occasionally posts events.

Reviews from tourists and locals praise Ruiz-Healy’s efforts. Dylan Maisel, owner and operator of The Daily Beet, a local juice bar and cafe, praises South of Eden for being “the most nourishing and delicious food in town.” One customer visiting New Orleans from New York wishes Ruiz-Healy could “live in my home and feed my family every day.”

For Ruiz-Healy, this passion project helps her alleviate some of the homesickness she feels for Mexico through cooking dishes that connect her to her home. She welcomes tourists and loves when they find her. But she also found herself a “tribe” of friends that allows her to continue focusing on her own health and provide nourishment to local communities. “This is a public service,” Ruiz-Healy says. “ A community service.”

A Vegan Chef’s Guide to the Big Easy

If you’re in New Orleans and looking for things to eat and see, check out @VeganNewOrleans. But be sure to add local vegan food-trepreneur Liliana Ruiz-Healy’s recommendations.

1. Investigate some Indian Inspiration.
At first glance, the menu at Paladar 511 contains a lot of meat and seafood, but Ruiz-Healy assures that this Indian restaurant in Faubourg Marigny caters to vegans. “They use a lot of beautiful flavors and techniques,” says Ruiz-Healy. “I find it very inspiring.” Try the Little Gem Lettuces, which feature roasted beets, dill-yogurt dressing, sumac, and puffed grains and seeds ($11).

2. Consider Quick Comfort.
A vegan-friendly, comfort-food spot situated between the Bywater district and the Ninth Ward, Sneaky Pickle is great for satisfying quick cravings. Operated by former Marine Ben Tabor, Ruiz-Healy swears by the “delicious” sushi rice bowl ($7.50) with spicy Sriracha aioli, and she says Sneaky Pickle has “the best” homemade fries (from $2.50). “Ben is doing a very beautiful job with his food,” Ruiz-Healy adds.

3. Get Juicy.
Good Karma Prasad Cafe, from which Ruiz-Healy operates her Sunday brunch, features a plant-based menu that works for both breakfast and lunch. An on-premise community garden that Ruiz-Healy uses to grow herbs and edible flowers means many homegrown ingredients. Pop in for a refreshing juice like the Beet Your Greens, which features kale, parsley, ginger, apple, beet, and kombucha ($7). They also have “the best housemade chai (from $3.50) I’ve ever had,” Ruiz-Healy says.

4. Enjoy the Cocktail Hour.
On the eastern outskirts of trendy Faubourg Marigny, The Franklin earns praise for its biodynamic wines (made with a set of farming practices that view the farm or vineyard as one solid organism) and its cocktails that feature fresh juices and house-made mixers. “They use a lot of nice herbs,” Ruiz-Healy adds. Try the Poolside Convo, which combines gin and Cocchi Americano with lime, arugula, and celery.

5. Park It.
Situated just east of the French Quarter, Crescent Park covers 20 acres and sits on the banks of the Mississippi River. Take in the city views on an evening stroll as the heat begins to fade (somewhat). “It’s a very nice place to watch the sunset,” Ruiz-Healy says.

6. Put Your Practice into Play.
Swan River Yoga offers a range of yoga classes (from quick flow to restorative, chakra flow, and night owl; $15 a class or $70 for five) and features private wellness services such as massage, ayurvedic consultations, and yogic sleep to help you take it easy while visiting New Orleans. Ruiz-Healy recommends taking classes with co-owners and sisters Keith Porteous and Michelle Baker.