Race and the Roots of Veganism

When four Black men sat down in the pink-and-green swivel chairs of the “whites only” lunch counter at F. W. Woolworth in Greensboro, N.C. and refused to leave, cameras and news stations swarmed the five-and-dime. Ezell Blair Jr., David Richmond, Franklin McCain, and Joseph McNeil made history on February 1, 1960 as they sat in those cold metal chairs until the store closed. This bold decision became known as the Greensboro sit-in and served as a catalyst for a series of protests across the country. It also served as another point on a long, historical timeline of Black people using food as a vehicle for protest — long before the Greensboro sit-ins and long after. In fact, just as food informed the Civil Rights movement so too does Black veganism play a role in the protests for rights and equality that continue today. And as the fight for justice continues, famed activists such as Dick Gregory and Angela Davis pass their contributions to the movement on to today’s authors and thought leaders such as Tracye McQuirter.

For more than 30 years, McQuirter has educated the Black community on connecting veganism and social justice, specifically within the Black Lives Matter movement. She has written several self-help books that feature recipes, including By Any Greens Necessary, which The New York Times praised as one of the key books to shine “a new light on Black veganism.” Most recently, McQuirter co-authored Ageless Vegan with her mother; it seeks to help Black people transition smoothly into veganism. NEHA spoke to McQuirter about the influence of Dick Gregory on her own transition and how veganism exists as a long-standing feature of Black culture.

NEHA: Could you talk to me a little bit about your journey to veganism and how you’ve evolved over time?

Tracye McQuiter: When I was a sophomore at Amherst College, our Black student union brought Dick Gregory to talk about the political, economical, and social status of Black America. Instead, he chose to talk about how unhealthily Black folks eat, and I was one of them. That’s what started it for me. I was taking a lot of of classes on racism, sexism, classism, elitism, and third-world imperialism and learning about homophobia. Some of these I was learning about more deeply, but most of the things I was learning about for the first time. I was just questioning a lot of things, and it was just the right moment for me to question the way society dictated the way that I should eat — African Americans in particular. Gregory traced the path of a hamburger from a cow on the factory farm to the slaughterhouse, to a fast food restaurant, to a clogged artery, to a heart attack. I had never heard anything like that before in my life.

It started with Dick Gregory making these connections, and this was in 1986. So the term intersectionality had yet to be said. But that’s how he was discussing it, and that’s the context that was working for me. That’s what started it all. Within a year and half, I was vegetarian and then fully vegan.

NEHA: How does Black veganism force us to consider that race and racism extend beyond the body, beyond skin color, and into all facets of life, including food?

T.M.: The context in which Dick Gregory talks — there is no separation. There was no separation for me when I learned about it 30 years ago. Dick Gregory went vegetarian for ethical reasons first in 1965 because of his practice of nonviolence during the civil rights movement, and he wasn’t the only one. In the 1950s, Alvenia Fulton, a naturopathic doctor, opened the first vegetarian cafe and health food store on the Southside of Chicago. She was the one who helped Gregory extend his vegetarianism to health. When I learned about Black veganism, that’s how I learned it.

I studied abroad my junior year in college and went to Kenya for a semester. I had some incidences with animals that made me know that I would be vegetarian when I got back. Then I went to Howard for the second semester and discovered that there was this large Black vegan and vegetarian community in Washington D.C. — 10 minutes from my house, right up the street from Howard. I knew nothing about it. The group had been influenced by Dick Gregory, especially his book, Dick Gregory’s Natural Diet for Folks Who Eat: Cookin’ With Mother Nature, which was edited by Dr. Fulton in 1974. I immersed myself in this community, and this was where I learned how to be a vegetarian and vegan successfully.

When we went to political rallies, anti-war demonstrations, and any kind of political activism in the ‘80s or ‘90s, vegan food was served. That was the food that was served — always. There were vendors down on the mall when we had celebrations — vegan vendors. It was just a natural part of our heritage, culturally. For me, it’s never been divorced. I learned to be vegan through Blackness. Ten or 20 years in, I am learning that a lot of younger Black folks coming into veganism are not having this experience. I learned that pretty early when I decided to do this full-time and started traveling around and talking to people, that they just didn’t have this community.

NEHA: Yet most people associate veganism with whiteness.

T.M.: I always discourage people from saying veganism is white. No, veganism is Black. It has always been a part of our culture and our heritage. There has always been a stream of folks that were vegetarian and vegan for centuries in this country. In western Africa, in particular, people live plant-based. So this is ancient.

What I try to do is to basically talk about it with people about the connection — in the way that Dick Gregory talked about it with me. We were plant-based and meat was not a primary thing. Meat was a condiment. You know, my mother’s generation and generations before in the South, we were primarily plant-based from necessity. This community in D.C. had the first 100-percent vegan cafés, health food stores, carryout and co-op in the city — Black-owned. And these were in low-income communities. These were not in middle, upper-class communities. They were doing co-ops. They were doing CSA. It’s always been doable. None of this is new. So I kind of try to immerse people in the content, the sort of history that we’ve already done. It’s already Black, and it can be done.

NEHA: How have you seen the Black Vegan movement evolve over time? What is important now?

T.M.: I love that there are so many Black vegans out there or soon-to-be Black vegans and vegetarians. There are about 1.4 million Black vegans and vegetarians. That’s the best estimate we have: half vegan, half vegetarian, and it’s growing. Then there about 35 percent of us who order plant-based meals, who go out on a regular basis. That’s a big, big deal compared to 30 years ago. We had this community in D.C., obviously. When my sister and I did BlackVegetarians.com back in 1996 to 1997, there weren’t others; we were the first online. We were the first Black-vegan site. It was a magazine format — by and for Black vegans. There was another older woman, who had a blog where she was talking about her journey. Ours was more about showing people how and why to do it, with interviews and all of that. Take that from 1997 to now, and you can’t even count how many there are. For me, it’s fantastic and exciting, and I love it. It’s just a huge change and huge shift. We didn’t even use the term vegan. We used the term vegetarian as the umbrella term because it encompassed everybody. Everybody didn’t eat meat. That was the thread. But underneath that umbrella, you could be raw foodist, fruitarian, whatever. It was late that people tried to distinguish themselves as vegan and vegetarian and make them separate things.

NEHA: Who are some of the Black vegans we should know?

T.M.: You have Black Vegans Rock started by Aph Ko, and that’s giving a platform for it. Ko has no problem getting people to talk about being vegan, why they did it, and how they did it. It’s just perfectly normalized now. It’s not just by chance. It’s because of the efforts of that platform, and the work I’ve been doing with Traci Thomas, the founder of the Black Vegetarian Society of Georgia. That was the first Black vegetarian society in the country. She helped many more get started back in the ‘80s and ‘90s. There are just concentrated efforts, community efforts, talks, events, and seminars. Then when we have the internet, people doing it, learning it, and sharing it. It’s just been a movement — a wave of people who have actively created this momentum. I think it’s really exciting, and it’s only going to increase.

NEHA: Why do you think that it’s important in 2018 for Black people to consider a vegan lifestyle?

T.M.: I want Black folks to be free in their life. For me, this is all about freedom, health, and happiness as a foundation. Once you have that, you can do anything — you can pursue your passions, you can loaf around. It’s powerful to me to know that the food that you’re eating is most likely going to help you live a disease-free life. It’s not 100 percent, but it’s the closest we have. If you know at 20 years old that for the rest of your life you’ll probably be healthy, it just opens up the world, as far I’m concerned, to what you can do. That’s number one. I just want Black folks to understand that we can live healthy for life. That’s incredibly liberating to me. We lose so many people prematurely because of the food that they eat, and they don’t have the same information. That affects their personal families, but that affects the community, that affects the country, that affects society.

T.M.: We are marching in the streets, protesting, resisting, and organizing around Black Lives Matter, as we should. But there are 300,000 Black people who die every year from the food that they eat, and we’re not out protesting that because we don’t know it. That’s like 800 people every day crashing into a mountain on a plane — every single day. And people can’t conceptualize that. We lose 800 people a day on average from chronic diseases because of the food that they’re eating, and that is something we have control over immediately. You can be a victim of police brutality and murder, but you are more likely to be killing yourself prematurely because of the food that you eat. You can go to a protest and then go to a fast-food restaurant afterward. That makes no sense to me, but people don’t make the connection. That to me is why it’s so compelling in 2018 right now for Black folks to get this information. We are all about Black lives, as we should be, and this is the most important thing we can do to save our lives. It’s simple — people overlook it, and they just don’t think about it because they don’t have the information. It’s our job to share what we know and what we’ve lived.

Banner photo courtesy of A Little Bit of Whimsy Photography. 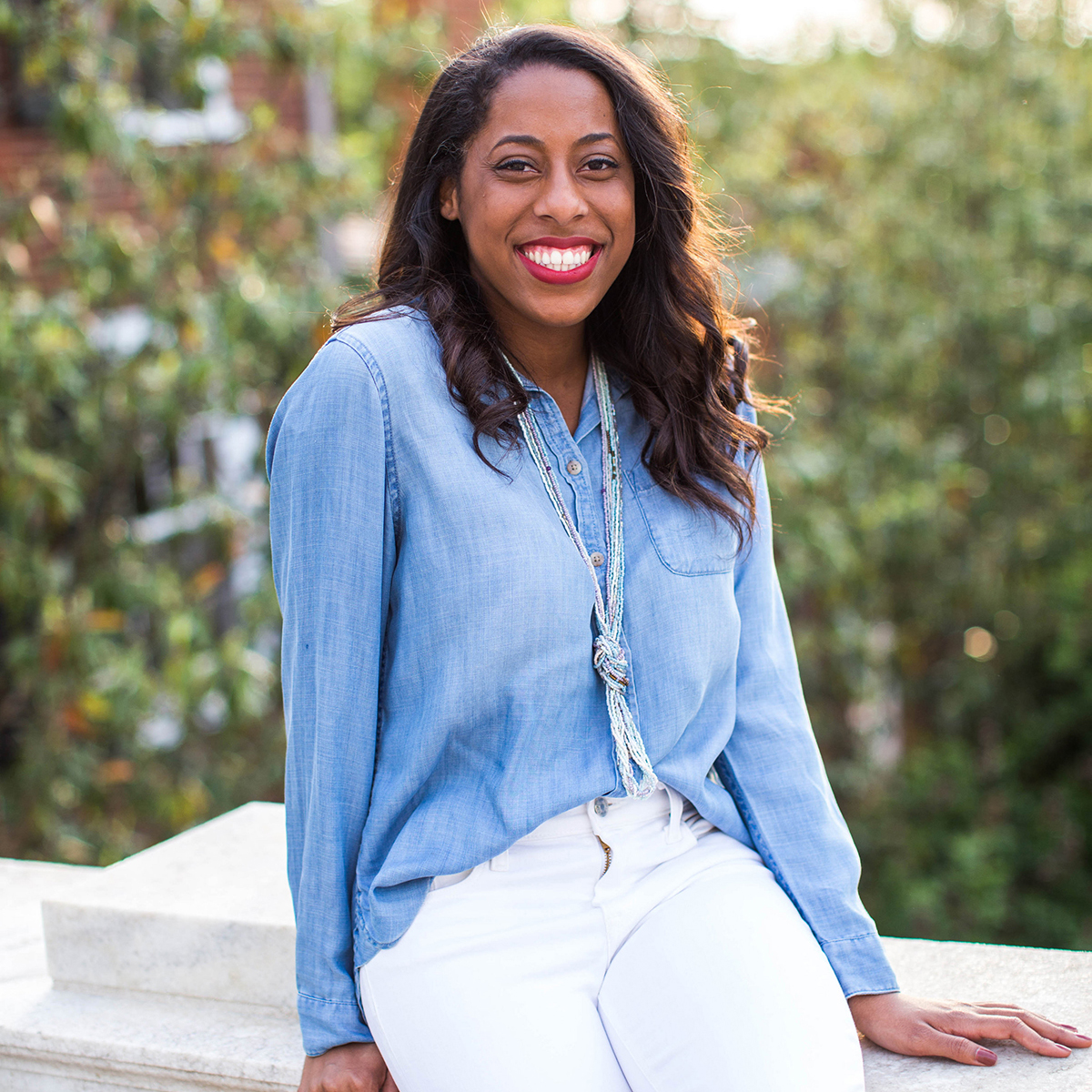 Alexis Jones is the Voyages editor for NEHA. Prior to Newhouse, Jones attended the University of Virginia, earning her bachelor’s degree in English literature and media studies. Originally from Dover, Del., Jones will be heading to New York City this summer to continue pursuing her journalism career.