Food speaks to the African-American experience of oppression and revolution — from okra seeds in Middle Passage slaves’ pockets to barbecue-joint meeting spots for civil rights leaders and renowned vegan activists Coretta Scott King and Dick Gregory. A growing number of contemporary chefs are trading in their ham hocks, chitlins, and fried chicken legs in favor of plant-based eating and view that change as an important fixture of the Black experience and critical component of today’s social-justice efforts. Jenné Claiborne, author of Sweet Potato Soul: 100 Easy Vegan Recipes for the Southern Flavors of Smoke, Sugar, Spice and Soul, says she and her peers turned to veganism for two reasons. “For a lot of Black people, it’s the social justice and food access,” she told The New York Times. “The food we have been eating for decades and decades and has been killing us.”

In fact, a generation of vegan, soul-food restaurants wish to feed, educate, and heal. Add these six culinary destinations to your travel itinerary pronto.

Although Motor City is enjoying a green moment thanks to urban farming and initiatives like Detroit 2030 District, Kirsten Ussery and Erika Boyd saw a lack of vegan restaurants and healthy options at grocery stores. This propelled them to create Detroit Vegan Soul. 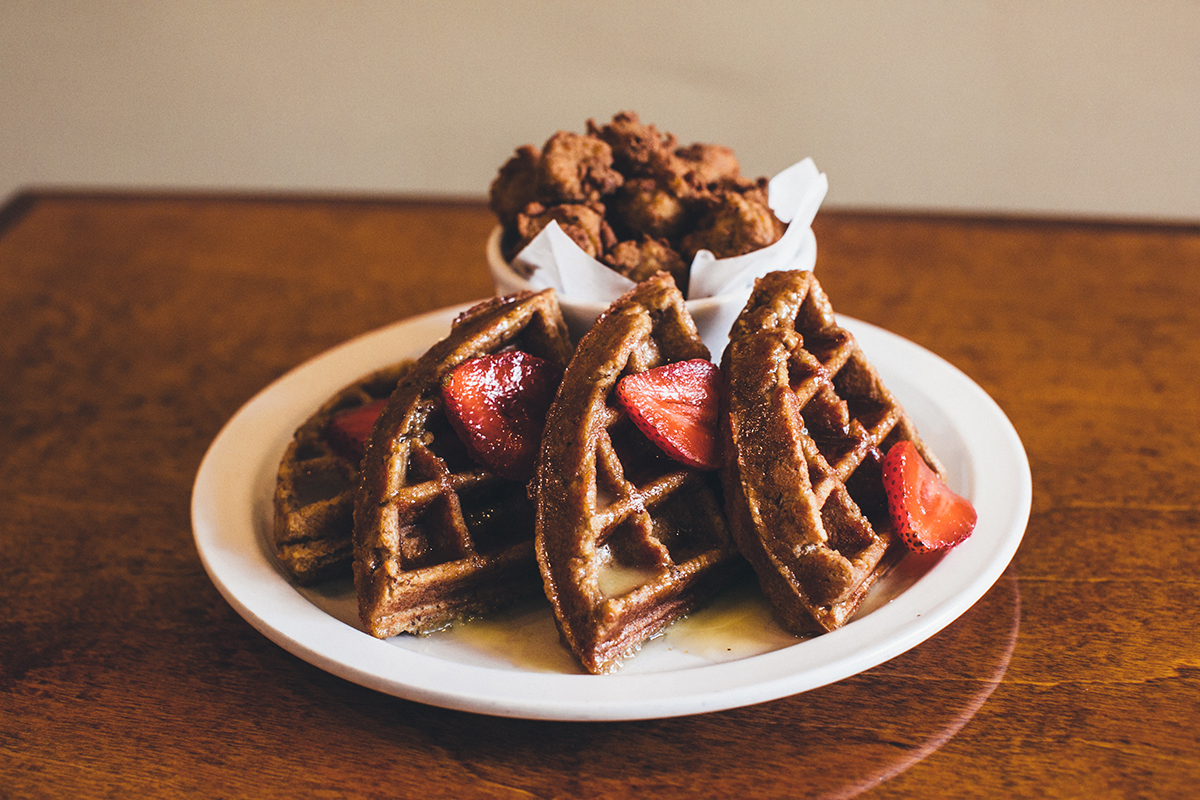 With an evolving menu, Detroit Vegan Soul offers a number of classic, soul-food dishes, but the “catfish” tofu is a staple and favorite of Boyd’s. Marinated, sea-vegetable tofu battered in crispy cornmeal is topped with a creamy homemade tartar sauce. “There are still some people who don’t know what vegan means,” Ussery says. “We’re able to talk through it with our customers and sometimes even get into deep conversations about nutrition and flavor.”

The Land of Kush

The Land of Kush is the leading vegan, soul-food restaurant in Baltimore and serves as a central hub for Black vegans who wish to celebrate their culture. Owners Gregory Brown, Naijha Wright, and Darius Waters founded the restaurant to create a community for its patrons. The Kush BBQ Ribs mimic the smoky depth of flavors one might find from a Deep South church barbecue. Pressed tofu emulates the texture of smoked meat, and a thick and spicy pepper-based sauce coats each “rib.” Available only on the weekend, the textured vegetable protein crab cakes seasoned with Old Bay are a favorite of Land of Kush regulars.

The owners take pride in being a thriving Black-run business within the city and participate actively in the Black community of Baltimore. Wright co-founded Vegan SoulFest to expand his mission, and his lines of loyal customers has him considering new locations around the city.

Souley Vegan prides itself on spicy Creole seasonings and a bold approach to the vegan lifestyle. Owner Tamearra Dyson founded it in 2006, a time she says was before veganism was more widely accepted as a lifestyle. Her mission stays the same: to introduce the experience of soul food in a way that is educational and understandable. “I wanted a place where the food experience centers around phenomenal vegan food,” Dyson says. “People can learn about veganism, and can be more accepting of it.” Dyson enlists her “California living” attitude for the smooth and smoky flavors of her New Orleans home, and her African roots when preparing her dishes. The spicy okra gumbo pays particular homage to those roots, but Dyson tells everyone to try her buttery, flaky beignets, offered exclusively during Sunday brunch. 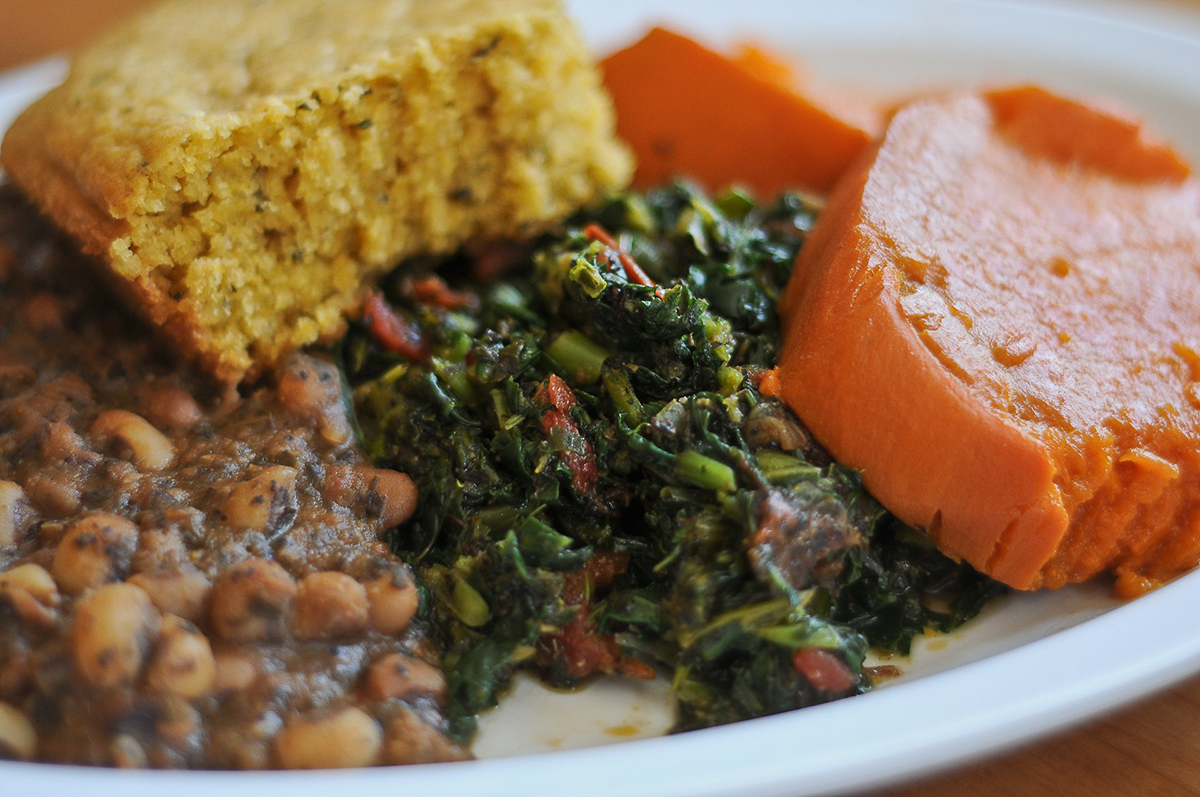 Tamearra Dyson, owner of Souley Vegan, focuses on producing wholesome, creole-inspired dishes people can understand and enjoy without imitating types of meat such as greens, yams and black-eyed peas with cornbread shows that even the simplest dish packs in bold flavors. Photo courtesy by Souley Vegan.

Drop Squad Kitchen’s founder Abundance Child opened his restaurant in 2012 to advocate for healthier eating and living and to break down negative stereotypes tied to veganism. Don’t be surprised if Child herself comes to your table to tell you her story. She and her staff make small batches of flavorful kosher soul food to ensure freshness. The gluten-free mac and cheese — the restaurant’s top seller — uses cassava yams to create a  creamy and indulgent sauce.

The Big Apple boasts an unending list of herbivorous dining options, but native New Yorkers David Tianga and Pamela Blackwell still felt the city lacked a vegan restaurant reflecting their own cultural roots. So they created one — Urban Vegan Kitchen. Tianga boasts a menu that marries the soul food of their own Black and Latino communities with dishes like charred Mexican street corn and spicy fried okra. 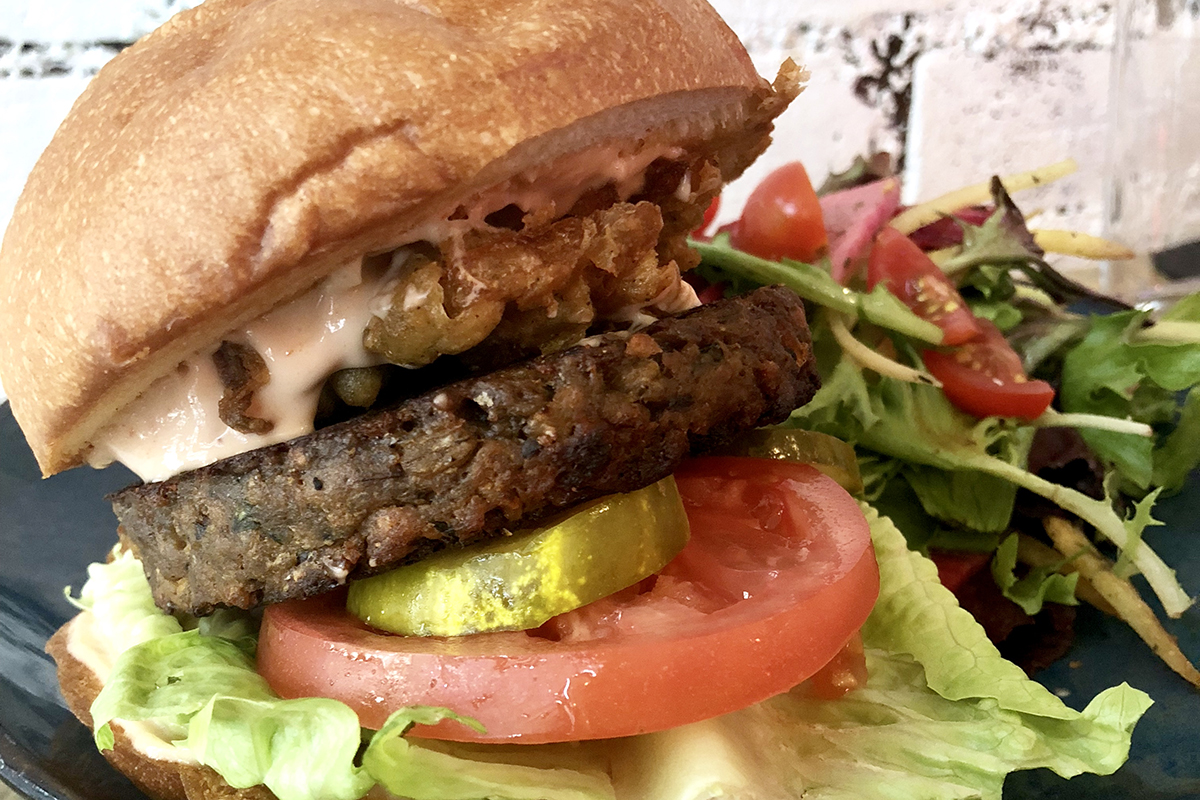 A restaurant co-founded by two people with deep multicultural roots, it became a space for discussion, hosting a number of events featuring animal and social activists. “We try to kind of break that gap that veganism is compassion for all beings, including human beings,” Tianga says. Try his personal favorite, the Happy Shrimp Po’ Boy accompanied by macaroni and cheese with a creamy cashew sauce and numu mozzarella.

The seeds of The Southern V  were planted the second Tiffany and Clifton Hancock began cooking homemade meals for their lactose-intolerant daughter. Desserts became the duo’s specialty and soon after they began selling their signature vegan donuts at farmers markets.

After their doughnuts grew a following, they soon expanded into a pop-up shop and very quickly into a small shop in the growing Buchanan Arts District of Nashville. The restaurant’s crispy chick’n waffles made with spicy fried seitan and flaky Belgian waffles with organic maple syrup recall the city’s classic hot chicken dish. “Our mission is to provide a transition for those curious about veganism and also provide that nostalgia for those that have been vegan for years with Southern flair to it,” Clifton Hancock says. 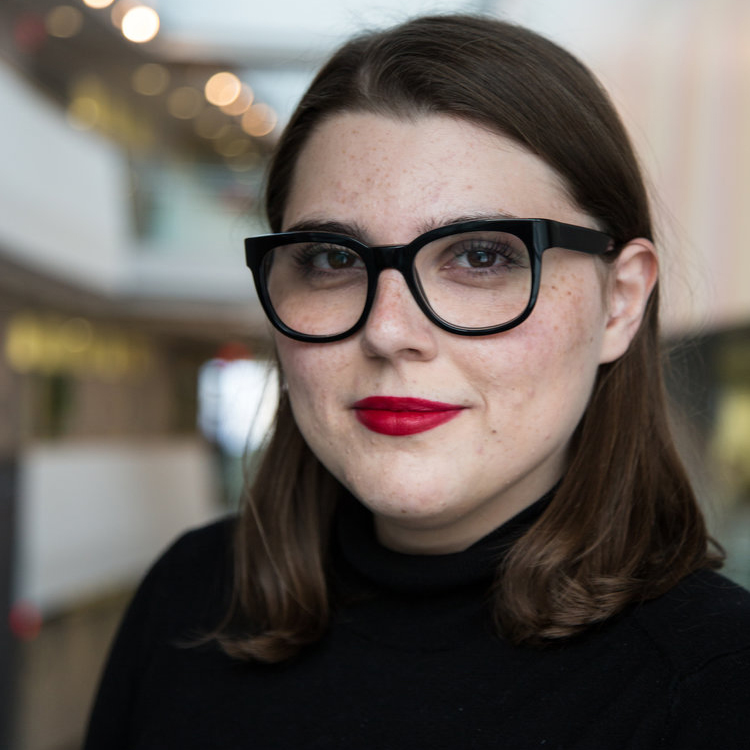